Why is the Leaning Tower of Pisa tilted? 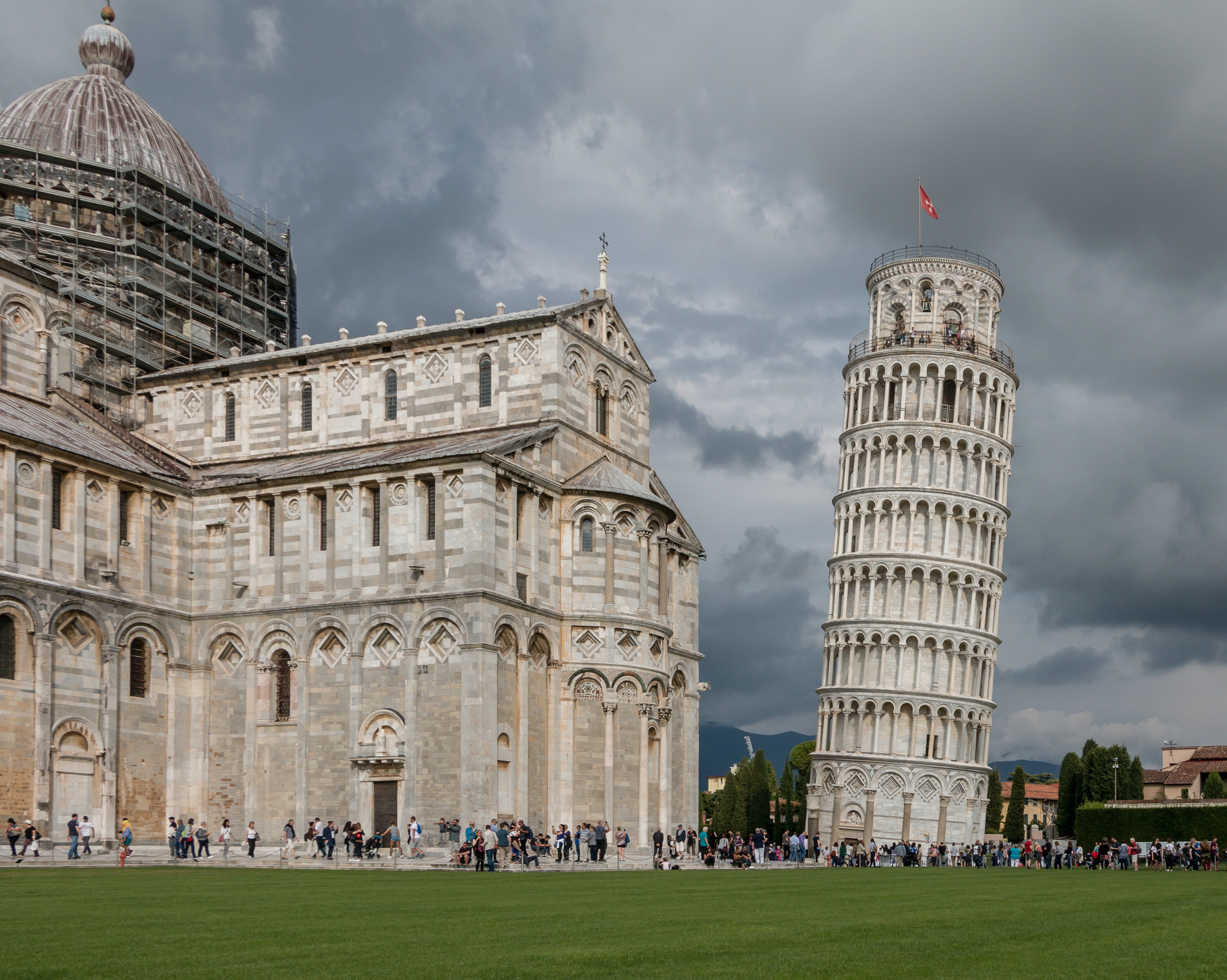 “l'italia lascia il segno”. When translated to english, it means “Italy leaves its mark”. From its delectable food to stylish cars, Italy has given a lot of marvels to the world. However,  one phenomenon of La Italia which is famous for a very unique reason is the “Leaning tower of Pisa”.

Known among Italians as Torre Pendente di Pisa, is the freestanding bell tower of Pisa Cathedral and is the third oldest building built in the square, after the wonderful Cathedral and its Baptistry. Located in the town of Pisa, it is made up of marble, lime and stones, made in Romanesque style like the other churches and palaces made during the same period. What sets it apart? The fact that it's “leaning” and not straight.

Another interesting fact that might come as a surprise to a lot of people, is that this monument wasn’t planned to be made like this. It merely happened. Before we dive into its unique structure, let's learn a bit more about its history.

The construction of this tower began in 1173. It was designed to be a bell tower. The building of the leaning Tower of Pisa, and especially its completion, represents the last element of the ceremonial complex of monuments that enrich the Piazza dei Miracoli (Square of miracles). The project included four representative monuments in the city of Pisa, Italy: the Cathedral of Pisa (Il Duomo di Pisa), the Baptistry, the Bell Tower of Pisa, and the Monumental Cemetery. The construction of the Tower of Pisa began in 1173 and was completed in the 14th century, in 1399. Bonanno Pisano, Gherardo di Gherardo, Giovanni Pisano, Giovanni di Simone and Tommaso Pisano were the architects.

Coming to the main question, why is it tilted?

The foundation of the tower, which is only 3-metre deep, was built on a dense clay mixture. This mix impacted the soil. To add to the problem, the clay was not  strong enough to hold the tower upright. Three stories had been completed when the uneven settling of the building’s foundations in the soft ground became noticeable. As a result the weight of the tower began to diffuse downward and lean. Stunned at what stood before their eyes, the architects didn’t know what to do. This was followed by a war against Genoa and other city-states, which halted the further construction for almost 100 years. Fortunately, this gave the foundation enough time to settle in the ground and prevent an early collapse. As efforts were made to correct the tilt, and as the structure grew in height, the tower ended up leaning one degree to the south.

After the war was over, Giovanni Di Simone, the engineer in charge, tried to compensate for the tilt by making the new stories slightly taller on the short side, but the extra masonry and weight caused the structure to sink still further. The project was plagued with interruptions, as engineers sought solutions to the leaning problem, but the tower was ultimately topped out in the 14th century. Eventually the bells were installed, but they were silenced later as the engineers feared that their movement might cause the tower to collapse. The foundations have been strengthened by the injection of cement grout and various types of bracing and reinforcement, but in the late 20th century the structure was still subsiding, at the rate of 0.05 inch (1.2 mm) per year, and was in danger of collapse. In short, a small architectural mistake in the foundation caused the tower of pisa to become the “leaning tower of Pisa”.

Why does the Leaning tower of Pisa not fall?

Considering that the tower is so lean, why hasn't it collapsed? The Leaning Tower of Pisa has been leaning for over 800 years and, despite earthquakes, storms and wars, it is still standing. Some of the reasons are:-

2. Dynamic soil structure interaction :- A new study has found that the tower’s resilience is all down to a phenomenon known as dynamic soil-structure interaction (DSSI). “Ironically, the very same soil that caused the leaning instability and brought the tower to the verge of collapse, can be credited for helping it survive these seismic events” this was said by George Mylonakis, from the Department of Civil Engineering at the University of Bristol.

These, along with the straightening project that was carried out by the engineers have ensured that the Leaning tower of Pisa does not collapse and stays firm even during earthquakes that have hit Italy.

Here are some quick and interesting facts about the Leaning tower of Pisa :-

2. It is a part of a bigger architectural complex :- It is not a standalone building and is accompanied by a church and baptistery.

3. There are more leaning towers in Pisa :- Church of San Nicola and Church of St. Michele dei Scalzi is also tilting.

5. The tower is leaning, and curved :- Aside from the leaning, the tower is actually curved at some point of its structure. That happened because of the scared engineers who tried to fix the first tilting. Indeed, they thought they could have solved everything by building one side of the upper floors taller than the other.

The information contained in this Site has been provided by Propscience for information purposes only. This information does not constitute legal, professional or commercial advice. Communication, content and material within the Site may include photographs and conceptual representations of projects under development. All computer-generated images shown on the Site are only indicative of actual designs and are sourced from third party sites.

The information on this Site may contain certain technical inaccuracies and typographical errors. Any errors or omissions brought to the attention of Propscience will be corrected as soon as possible. The content of this Site is being constantly modified to meet the terms, stipulations and recommendations of the Real Estate Regulation Act, 2016 ("RERA") and rules made thereunder and may vary from the content available as of date. All content may be updated from time to time and may at times be out of date. Propscience accepts no responsibility for keeping the information in this website up to date or any liability whatsoever for any failure to do so.

While every care has been taken to ensure that the content is useful, reliable and accurate, all content and information on the Site is provided on an "as is" and "as available" basis. Propscience does not accept any responsibility or liability with regard to the content, accuracy, legality and reliability of the information provided herein, or, for any loss or damage caused arising directly or indirectly in connection with reliance on the use of such information. No information given under this Site creates a warranty or expands the scope of any warranty that cannot be disclaimed under applicable law.

This Site provides links to other websites owned by third parties. Any reference or mention to third party websites, projects or services is for purely informational purposes only. This information does not constitute either an endorsement or a recommendation. Propscience accepts no responsibility for the content, reliability and information provided on these third-party websites. Propscience will not be held liable for any personal information of data collected by these third parties or for any virus or destructive properties that may be present on these third-party sites.

Your use of the Site is solely at your own risk. You agree and acknowledge that you are solely responsible for any action you take based upon this content and that Propscience is not liable for the same. All details regarding a project/property provided on this Site are updated on the basis of information available from the respective developers/owners/promoters. All such information will not be construed as an advertisement. To find out more about a project / development, please register/contact us to visit the site you are interested in. All decisions taken by you in this regard will be taken independently and Propscience will not be liable for any such loss in connection with the same. This Site is for guidance only. Your use of this Site - including any suggestions set out in the Site and or any use of the resources available on this Site, do not create any professional - client relationship between you and Propscience. Propscience cannot accept you as a client until certain formalities and requirements are met.