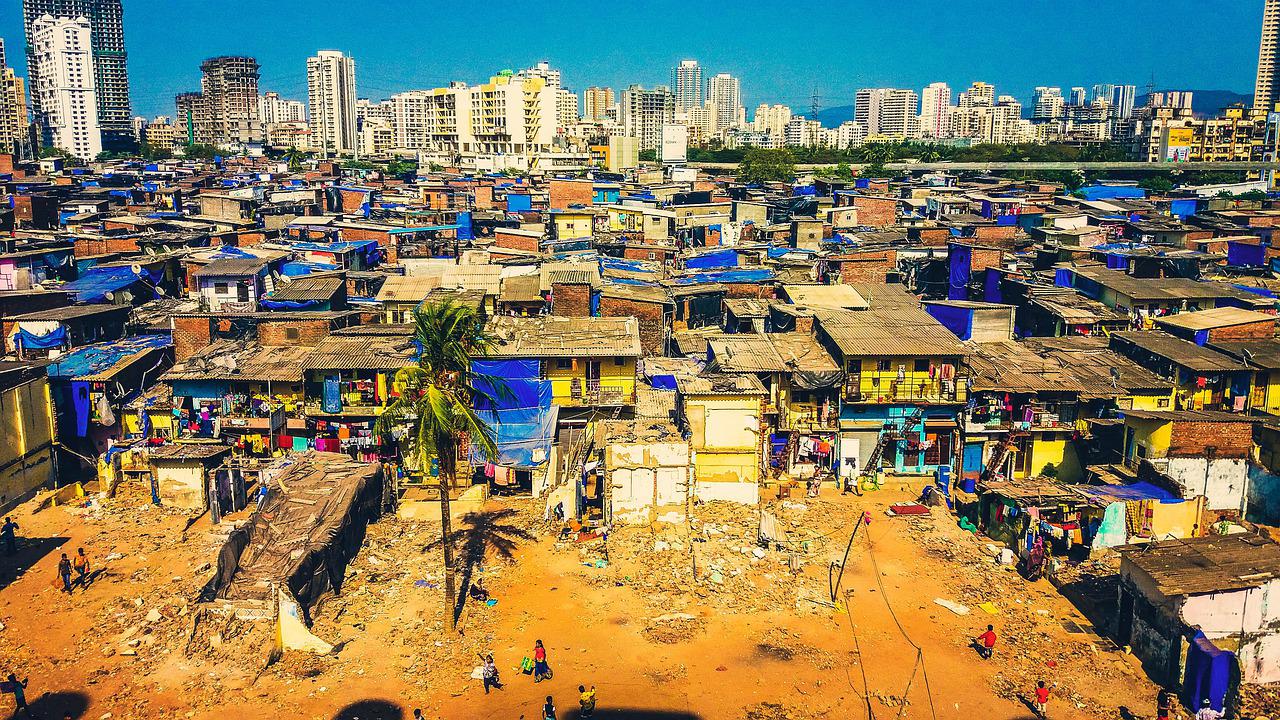 Originating from London, the word “slum” means an area of a city where living conditions are extremely bad, where the buildings are dirty which have not been repaired for a long time, a very poor and crowded area, especially of a city. The United Nations Habitat program defines slums as informal settlements that lack one or more of the following five conditions: access to clean water, access to improved sanitation, sufficient living area that is not overcrowded, durable housing and secure tenure.

An estimated 6.5 million people, around 55 percent of Mumbai’s total population, live in slums. Surveys state that Mumbai’s slums occupy 12 percent of its total geographic area and up to a quarter of the available construction area in the city. Dharavi Slum is known as the world’s most densely populated slum existing within an area of just over 2.1 square kilometres. In Mumbai, slums are notified or recognized by the government if they were settled on state or city government-owned land prior to 2000. Nearly half of Mumbai’s slums are non-notified, meaning they have no security of land tenure and are not entitled to access city services like connections to the water supply and sanitation.

Most slum houses do not have individual toilets and taps. Residents must pay to use community toilets which are rarely maintained and buy overpriced water from vendors. Some 78 percent of community toilets in Mumbai’s slums lack water supply and 58 percent have no electricity. Many slum houses do not have proper doors. The need of the hour is to reintegrate them by providing all the necessities and civic amenities to these slum dwellers. From a Real Estate point of view, this is where the Slum Rehabilitation Authority steps in.

The Slum Rehabilitation Authority (SRA) is a planning authority formed under the Slum Rehabilitation Act in December 1995. It was established to serve as a planning authority for all slum areas in the jurisdiction of Municipal Corporation of Greater Mumbai. The Chief Minister of Maharashtra, Shri Uddhav Thackeray is the Chairperson of SRA, and IAS Officer Shri Satish Lokhande is the full-time Chief Executive Officer of the Authority.

The Maharashtra government has recently increased the floor space index (FSI), or the permissible development on a plot, to 4 times from 3 across the state for slum-rehabilitation projects in Mumbai City. This FSI policy is meant to incentivise developers in other cities to come forward and take up slum redevelopment, which will help in decongestion of the crowded cities. The Slum Rehabilitation Authority is expected to roll out an amnesty scheme to revive and complete the 380 stalled projects. Under it, financial institutions (FIs) like non-banking financial institutions and others who have invested in the Slum Rehabilitation projects that are stuck or stalled will be allowed to redevelop without any major penalty. Further, the time frame within which a former slum dweller can sell his or her tenement after it has been demolished (as part of a SRA scheme) has been reduced from ten years to five years.

“Views expressed are the views of Propscience.com. Any action taken based on the views will be the responsibility of the user alone”

Next (Transfer of Development Rights & FSI)

The information contained in this Site has been provided by Propscience for information purposes only. This information does not constitute legal, professional or commercial advice. Communication, content and material within the Site may include photographs and conceptual representations of projects under development. All computer-generated images shown on the Site are only indicative of actual designs and are sourced from third party sites.

The information on this Site may contain certain technical inaccuracies and typographical errors. Any errors or omissions brought to the attention of Propscience will be corrected as soon as possible. The content of this Site is being constantly modified to meet the terms, stipulations and recommendations of the Real Estate Regulation Act, 2016 ("RERA") and rules made thereunder and may vary from the content available as of date. All content may be updated from time to time and may at times be out of date. Propscience accepts no responsibility for keeping the information in this website up to date or any liability whatsoever for any failure to do so.

While every care has been taken to ensure that the content is useful, reliable and accurate, all content and information on the Site is provided on an "as is" and "as available" basis. Propscience does not accept any responsibility or liability with regard to the content, accuracy, legality and reliability of the information provided herein, or, for any loss or damage caused arising directly or indirectly in connection with reliance on the use of such information. No information given under this Site creates a warranty or expands the scope of any warranty that cannot be disclaimed under applicable law.

This Site provides links to other websites owned by third parties. Any reference or mention to third party websites, projects or services is for purely informational purposes only. This information does not constitute either an endorsement or a recommendation. Propscience accepts no responsibility for the content, reliability and information provided on these third-party websites. Propscience will not be held liable for any personal information of data collected by these third parties or for any virus or destructive properties that may be present on these third-party sites.

Your use of the Site is solely at your own risk. You agree and acknowledge that you are solely responsible for any action you take based upon this content and that Propscience is not liable for the same. All details regarding a project/property provided on this Site are updated on the basis of information available from the respective developers/owners/promoters. All such information will not be construed as an advertisement. To find out more about a project / development, please register/contact us to visit the site you are interested in. All decisions taken by you in this regard will be taken independently and Propscience will not be liable for any such loss in connection with the same. This Site is for guidance only. Your use of this Site - including any suggestions set out in the Site and or any use of the resources available on this Site, do not create any professional - client relationship between you and Propscience. Propscience cannot accept you as a client until certain formalities and requirements are met.